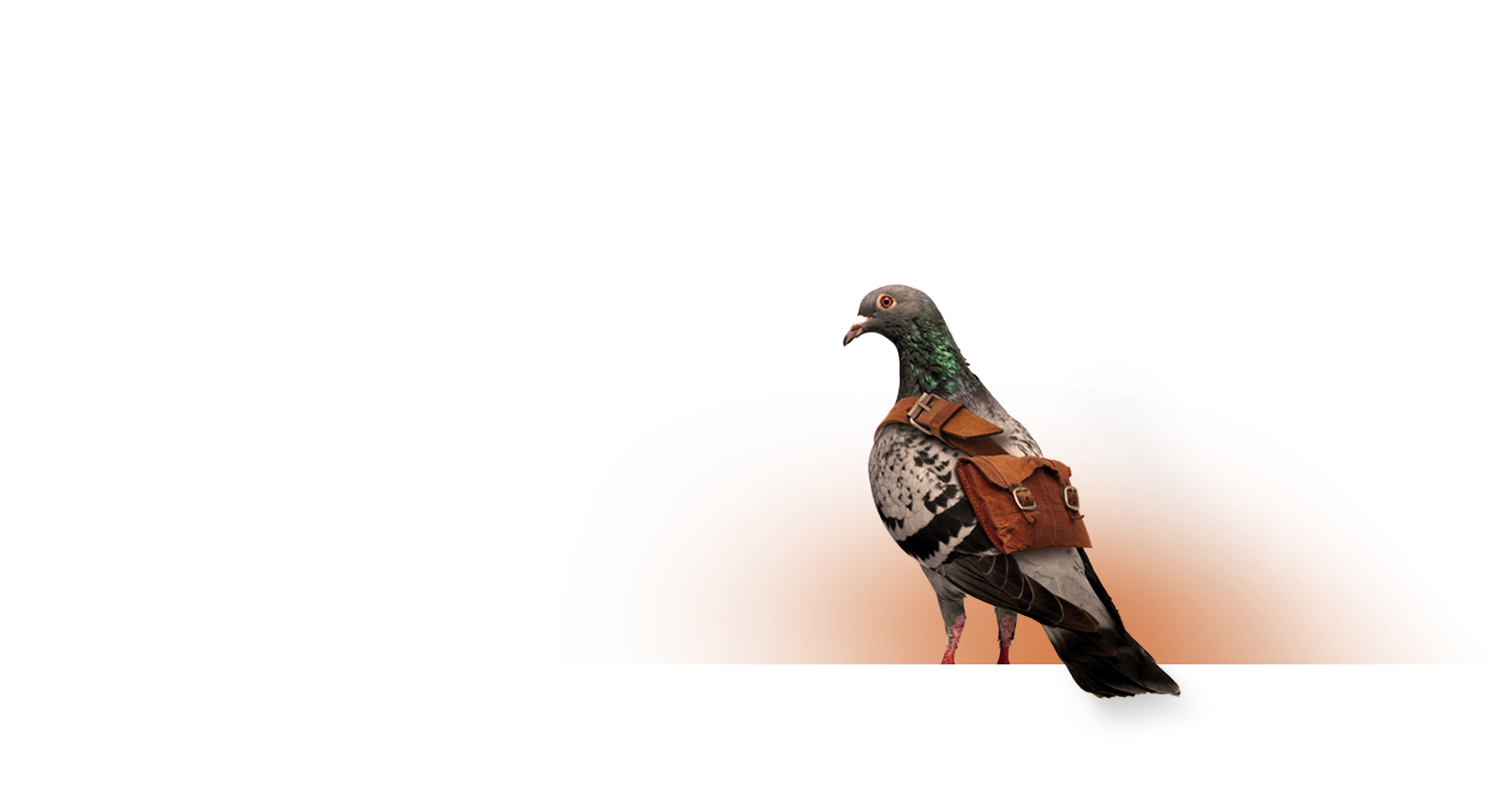 Having successfully managed email marketing campaigns on behalf of clients over the years, in March 2021 we kicked-off our own lead generation campaign. It’s not the norm to be totally transparent about how you’ve attracted new clients and what your success rate has been, but we like to share … so why wouldn’t we use our own campaign as an example?

We decided to stop our campaign after exactly 12 months, so we could review, publish and share the data with the very people the campaign targeted.

Why Does Email Marketing Work?

The premise of an email marketing campaign is to target individuals in the right sector, at the right level, who you genuinely believe would benefit from your expertise. It’s an audience that often don’t know they need you or wouldn’t know what to search for, if they did. This is the key differentiator from paid search, which typically attracts people looking for a solution to a problem that they know they have. When you capture the interest of someone who didn’t know they needed you, it allows you to explore the potential problems, rather than be expected to instantly suggest solutions – generating a better quality consultative conversation from the outset.

Our emails were sent automatically to identified individuals and came from a designated James Good team member. There was an initial email and then a series of follow-up emails over a specific period of time.

There were doubters amongst our team – “This isn’t right for us. It feels too spammy. It won’t work” – who quickly learnt that predicting that each contact would respond as you would, is a rooky mistake! When you’re contacting a high volume of people the responses will, of course, be varied. Some people will hate the approach, but others will welcome it, some will even be grateful!

But, is Email Marketing Allowed Under GDPR?

Yes. This kind of email prospecting approach is GDPR compliant and PECR compliant. The emails only target business prospects and the communication is written with a clear opt-out option. There are six lawful areas where a business can process personal data. Our emails are of ‘legitimate interest’ to everyone we contact. All contacts are publicly available through LinkedIn.

We also worked with a very experienced company to make sure our campaign was compliant and reached the right people at the right time.

What Did the Emails Say?

We spent a lot of time writing our emails, with the objective being to arrange a phone call. The first email was a message explaining what we could do, followed by a series of follow-up messages. They were all crafted to reflect our style, but the fourth and final email – the last chance to get noticed – featured a provocative message about Kevin, our infuriating pigeon! 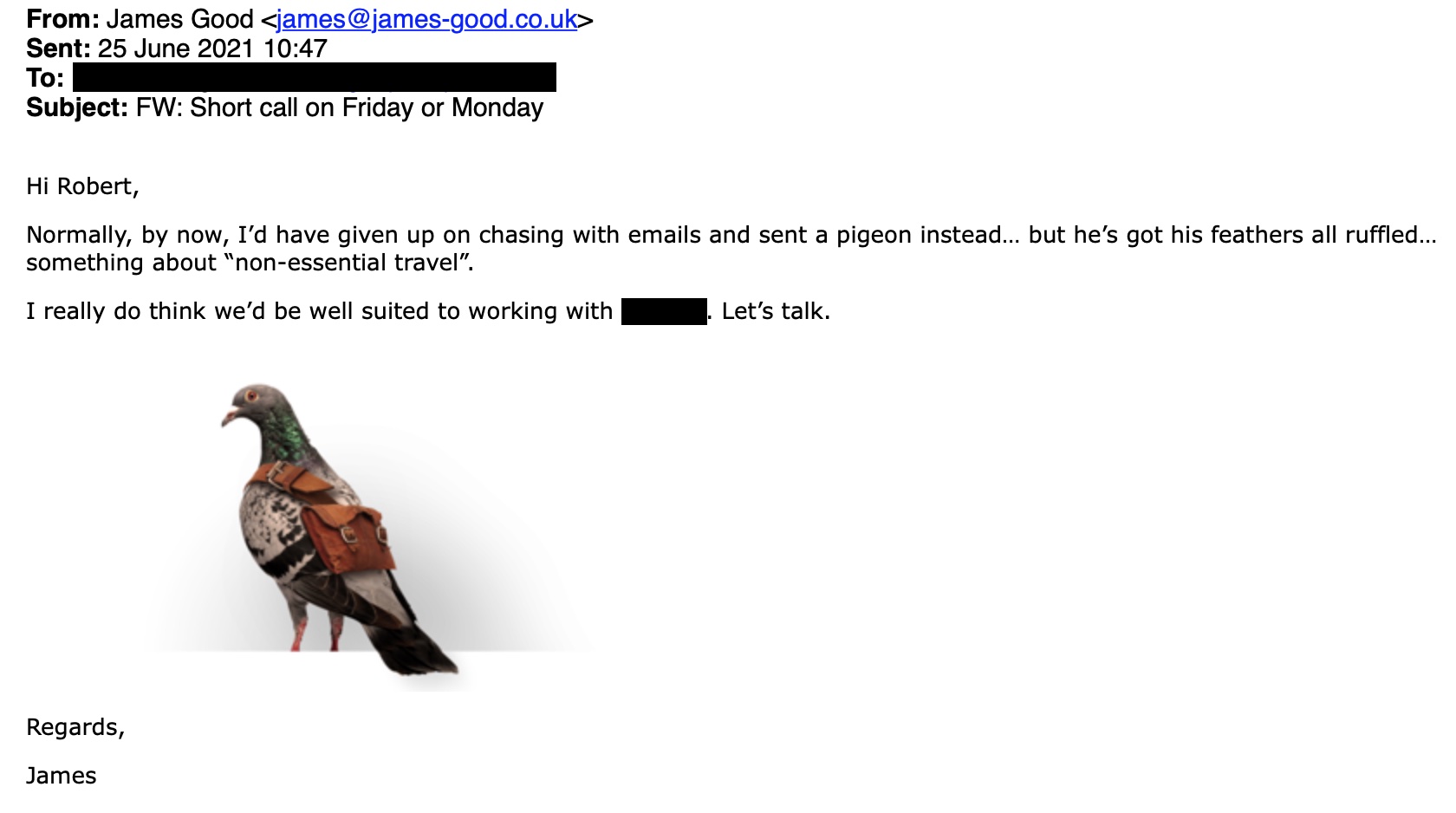 We received a great response from the last email, probably because it just made people smile – no bad thing during the peak of the pandemic. But, importantly, our carrier pigeon delivered a real sense of our own personality.

"I would usually ignore these sorts of emails, but couldn’t not respond to an image of a Pigeon wearing a satchel. So well done."

How Did People Respond to the Emails?

Despite internal scepticism about email marketing, if a campaign is set up with well considered targeting and good messaging, you will get responses…

We had polite, apologetic, kind, funny, arrogant and sometimes furious replies dropping into our inboxes … occasionally all in the same day, making for quite the emotional rollercoaster! To try and make sense of these responses they were grouped into a few categories to help us work out how to follow up, including:

This was anyone who replied to tell us that they weren’t interested. These didn’t just get archived, each one was reviewed and some received a further message. Particularly if objections were cited that logically could be overcome with a further message, for example:

“I don’t like the way you’ve approached me, why do you think I would be interested?” is a question that requires an answer! As is, “Now is not a good time.” or “I’m not the right person to talk to,”

A typical response was, “not right now, try again in 6 months” or “I’ve spent all my budget for this year, call me next year”. These could be people who were too polite to send us packing, or they might have a genuine interest in speaking another time, it was hard to tell. All of these people were followed up with a confirmation that we’d be back in touch… and we will, if we haven’t already.

The person who responds positively is the dream! 132 people over the year said they were happy to have a call or online meeting. 132 people had no problem with the approach, and these contacts were where we applied most effort into securing new business. The ability to turn these positive responses into paid work was our final challenge.

This is the bit that takes time and exceptional commitment. To make the most out of the campaign investment, following up is crucial …

At times it felt over-whelming, the phone calls seemed endless. But, as well as winning work, a side benefit was the perfection of the pitch. The pure volume and intensity of the sales meetings gave us the opportunity to understand what people wanted to hear from us, and so we tested different approaches and refined our conversations accordingly.

We’ve had 152 conversations as a result of this campaign and we’ve seen a good return on the money we’ve invested. However, we’ve also now got lots of open opportunities and proposals that need to be followed up – converting more of the leads into actual business.

As well as the success we can measure in numbers, we’ve also experienced a few other benefits that are harder to quantify, in the shape of three ‘feel-good’ projects …

The first was quid-pro-quo where exchanged no money, but swapped expertise. The second was a great referral for our ‘Good for the Soul’ programme. And, the third was the opportunity to refer a new client to a friendly business in our network.

None of these things brought financial reward for us, but we did benefit from a massive dose of feel-good factor!

This article is part of the process, as is the email we’ve sent promoting it to everyone who sent us a response in the past 12 months. What better way to close our campaign than to demonstrate that we know what we’re doing!

And, Award for Best Response Goes to…

Why Is Cultural Fit So Important?
3 weeks ago

Cultural fit is determined by shared beliefs and behaviours … mutual understanding and a natural alignment around the stuff that really matters. Consider the immense satisfaction you feel when you…

If you’re a leader struggling to find the right way to market your company, it might be beneficial to take a pause from ‘doing’ and invest some time in strategic thinking. At a time when the world is…

Good for the Soul – Free Strategic Marketing Support
9 months ago

We want to leverage our marketing experience and expertise to make a positive difference... and feed our own soul! How it Works: 3 for a Fee = 1 for Free! For every three fee-paying clients, we’ve…